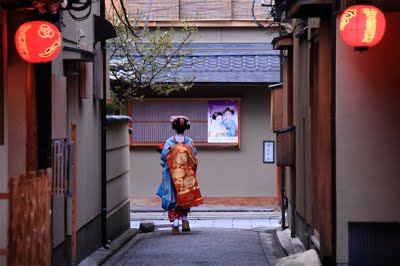 In November, 2010, I was in Kyoto. I paid a visit to Miyagawacho one day prior to the end of the trip. Strolling through narrow alleys when the curtain of night dropped down, I watched the lantern cast dim light on the door plank of Machiya (traditional wooden townhouses found throughout Japan) as if I were returning back to good old days. While casually taking a walk, I heard a clacking sound of geta (Japanese wooden footwear) made by someone stepping on the pavement laid with flagstones around the street corner ahead of me. An elegant geisha dressed in elaborate kimono appeared. “Konbanwa (Good Evening)!” I greeted her. Although her hasty steps implied that she was hurriedly on her way, the geisha gracefully leaned to make a bow and smilingly replied, “Konbanwa.”

That was the most impressive serendipity to me. Even though I failed to catch such a beautiful moment with my camera which was placed in my backpack, the scene from my memory remained vivid. During the days when I traveled around Kyoto, some unexpected episodes occurred in such a flash that my camera could not catch in time. Those that I failed to photograph would be kept deep inside my heart. I would like to share with you those precious moments luckily photographed by me in this exhibition.

In the past few years, I visited Kyoto and its surrounding areas in different seasons, centering my photography on themes such as gardens, old shrines, geisha, and flowers. I tried to catch the beauty of Kyoto by photographing what I experienced and appreciated. The distinctiveness of Kyoto has been often put into words. Without words, I found it challenging to convey my feelings and emotions, either tangible or intangible, by means of photography integrated with my own views. To gain superiority in both time and space and to probe into the essence of this city, I did my best to prolong my visit in Kyoto and tried not to hurry on my way so that I could slow down my footsteps and enjoyed my stroll around this enchanting city.

In the process of photography, I not only made reservations and arrived at some scenic spots ahead of time, but also paid a visit to a couple of little known places by referring to information offered by local seniors. What impressed to me most was a sense of tranquility I felt during those days in Arashiyama when I entered Tenryu-ji earlier than other tourists. Daybreak had not yet come, and all sounds were hushed. I alone savored the scarce moment in the washitsu (a Japanese-style room) where no one else but me was there, cautiously got my camera ready, and waited for the sunrise to come.

In my early trips to Kyoto, this city was somewhat unfamiliar to me. But with the increase in my visits to Kyoto, my feelings for it has gradually become intimate and close. My affection for Kyoto never changes even if I always discovered in this ancient city brand new faces and colors different from what I have already known. There are far more themes for me to explore, and my life of photography sentimentally attached to and inspired by Kyoto carries on.